The previous ARC application was for a grant to digitize the unrecorded Scott Johnson collection of about 2000 kamigata surimono because they contain records of poetry salon gatherings. This application is for funds to insert basic metadata into the ARC database from these surimono: to record the names of all participants and thereby begin the creation of database of individuals not only in relation to haikai but also the literary, visual and performing arts more broadly. The second major collection that will be essential to this project is that of Paul Berry, who has a about 2000 mostly unrecorded kamigata paintings. Combining art and literature research methodologies with digital humanities technologies, the key aims of the project are to analyse the role of art in a wider society, to create a sustainable open database of artworks and artist/producer names available for research, to host exhibitions in London and Kyoto, and to produce significant publications.

A Database Construction of Old Japanese Manuscripts and an Analysis Using Machine Learning(ヨーロッパ所在の日本中世古写経データベース構築と機械学習による解析) | 記事詳細 | [編集]
［Making WEB Union Catalogue of the Japanese Arts in Europe and North America, and the Application (欧米の日本美術品のデジタル・アーカイブによるWEB版総合目録構築とその活用)］
概要

A Study on Regional Learning Support System for The Changes of Townscape of Kyoto(京都の町並み変化に関する地域学習支援システムに関する研究) | 記事詳細 | [編集]
［Digital archive of the techniques, processing and enjoyment related to comics and anime focusing on international spread and propagation of culture（文化の国際的な普及と伝搬に着目した漫画・アニメに関する技術・処理・楽しみ方のデジタルアーカイブ）］
概要

It is not easy to reconstruct how Edo period users of maps, guide books and other representations of geographical or spatial information interacted with these materials. Did they look at a map and only see it as an abstract grid of lines and strokes, names and differently coloured squares? Or did the map evoke other visual experiences and spanned the bridge between a two-dimensional reduction of space to symbols and other graphic representations of space? Edo period consumers with an access to maps (of the whole country, of famous places, or of cities), guide books and depictions of famous spots around the country (sometimes evenabroad; China mainly but even Europe), one can assume, were able to relate information asprovided on a map not only with their own experiences of the represented places (if they had such): They probably were also able to relate it with what they had read in travel guides or with what they had gleaned from illustrations in such books in addition to printed geographical representations of these places. With the rise of coloured woodblock prints since the middle of the 18thcentury the vivid impact of pictures and the traces they left in the viewer's memory and the way they shaped the world view spatially and visually increased continually.

The ARC resources offer fine examples of maps, guidebooks and coloured woodblock prints available to the late Edo period consumer. This project will bring them together in an attempt to correlate sources of both geographical and visual experience and knowledge. Even if it cannot be proven that this attempt is of any historical reliability, it is one way of hypothetically reconstructing how different resources might have shaped the Edo period consumers's consciousness based on the materials they had access to.

This research project conducted jointly by the Sainsbury Institute for the Study of Japanese Arts and Cultures (SISJAC) and Art Research Center (ARC), forms part of a larger project to gain new insights into Japanese arts and cultures by cataloguing all public (and some private) Japanese collections in the UK. While some preliminary surveys have been undertaken of the collections of Japanese artefacts, there still is no satisfactory overview of the breadth of UK collections. As the UK's dedicated research centre for Japanese Arts and Cultures, SISJAC will be a key institute in developing the digital archive, as well as in raising awareness about its utility within the British and global academic communities, as well as in public outreach. 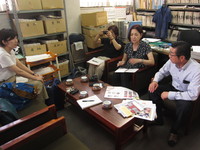 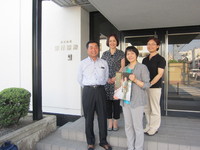