International Symposium 'Tracing the Reception of Japanese Art in the West: As Seen through Case Studies in Central Europe'

The International Joint Digital Archiving Center for Japanese Art and Culture (ARC-iJAC), Art Research Center, Ritsumeikan University, is pleased to announce the International Online Symposium 'Tracing the Reception of Japanese Art in the West: As Seen through Case Studies in Central Europe'.

This event is held in English with live simultaneous interpretation in Japanese available.

Topic: 'Tracing the Reception of Japanese Art in the West: As Seen through Case Studies in Central Europe' 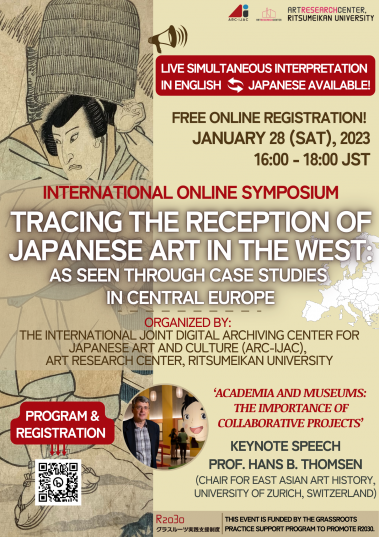 Looking at the history of museums and academia in the west, it seems that a chasm has opened between the two types of institutions. What used to be a seamless connection between the two, has, since the Second World War, become a noticeable separation. On the side of the academy, literary theory has become the driving force in academic discourse, and the close examination of objects have been dismissed in post-colonial discourse as fetishistic attachment to objects. The older idea of connoisseurship that used to lie at the center of academic discourse has now become obsolete, in fact, calling western art historians connoisseurs has become a term of insult. This is a phenomenon that is perhaps more prevalent in the western societies, but is showing an increasing foothold in East Asia.

On the side of the museum, there is an unchanging need to understand the objects in its holdings. The need for connoisseurship is very much present and the education of curators involves the extensive study of and exposure to works of art, and experienced curators come to have an easy understanding for the works of art in their specialized fields. The emphasis on post-colonial theory in the universities is seen as mostly irrelevant for the daily work within most museums.

In this way, the chasm has widened. In the side of the museum, there is a feeling of irrelevance toward the discourse within the universities, while academia tends to look down on museum work as being somehow inferior, due to its connoisseurly emphasis.

This situation surely needs to change. Both types of institutions have functions and goals that are fundamentally different from each other, and a recognition of these differences is needed. But above and beyond these differences, there is common ground and abundant reasons for collaborative work. In fact, there is much we could learn from each other. The collaboration between the University of Zurich and Ritsumeikan University of a good example of how universities can work together with museums in not only conducting surveys of its objects, but also in the wider dissemination of the findings through digital archiving projects.

During Philipp Franz von Siebold's two trips to Japan (1823 to 1830 and 1859 to 1862) he collected thousands of objects -- not only (or primarily) art, but many items of everyday life as well as plants and animals. Returning from his travels he spent much of his time trying to organize, exhibit and sell his vast collections. Only shortly after his death in 1866 his dream came true and his second collection became the foundation of what today is the Museum Five Continents, the state's ethnographic museum in Munich, Germany. The presentation follows Siebold's contributions to what could be called a new type of museum in the 1860s: a publicly accessible ethnological collection trying to represent the "complete" culture of a foreign country by exhibiting objects in a structured way.

Winterthur, a small town near metropolitan Zurich, is noteworthy for its considerable number of private art collections. Among these, one collection stands out for its owner's patronage and intimate personal contact with artists of the japonist and post-impressionist movements, particularly the Nabis group revolving around the Swiss Félix Vallotton (1865-1925) as well as the French Pierre Bonnard (1867-1947) and Édouard Vuillard (1868-1940). As these painters and printmakers held great interest in Japanese art and emulated in their works many compositional as well as pictorial aspects which they had observed in Edo period (1603-1868) woodblock prints (ukiyo-e), it is not surprising that the Winterthur collectors likewise acquired such Japanese prints to complement their collection. Although small in number, their choice of artists and the selection of only their most representative works reflects the collectors' well-founded knowledge of the genre. For example, next to single-sheet prints by renowned artists like Suzuki Harunobu (1725?-1770), Kitagawa Utamaro (1753-1806), and Utagawa Kunisada (1798-1865), their collection also contains rare colour-printed books as well as a complete set of Katsushika Hokusai's (1760-1849) Hokusai Manga. The latter is a painting manual highly sought after by many European painters involved in the Japonisme movement, for which reason it can be assumed that, at least in some instances, the private collectors of Winterthur either attempted to obtain copies of the same ukiyo-e that the artists whom they sponsored utilized as reference materials, or that they bought the prints together with these artists' finished paintings.