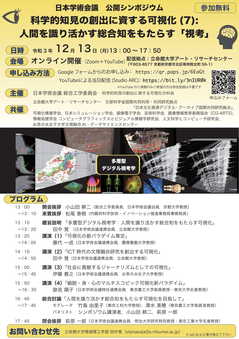 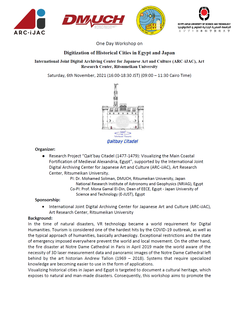 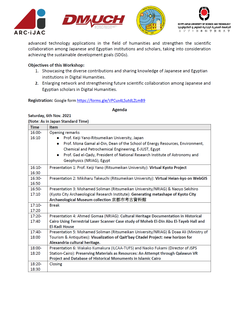 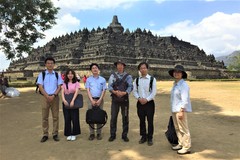 The Art Research Center (ARC), Ritsumeikan University, is delighted to announce the release of the 'Surname Map'--a research project led by Professor Keiji Yano (College of Letters), Deputy Director of the ARC.

Until the end of the Edo period, Japanese surnames had exclusively been granted to the emperor, nobility, and samurais. Following the Meiji Restoration and the enactment of the family registration law in the early Meiji period, farmers and other commoners also began to adopt surnames.

With more than 100,000 different surnames, Japan is not only characterized by great diversity in surnames but also regional variations in their distribution.

Based on big data of about 40 million surnames from Japanese telephone directories and large-scale residential maps, the Surname Map visualizes the contemporary spatial distribution of surnames across all prefectures in Japan.

This research began in 2005 when Professor Yano, then a visiting researcher at University College London (UCL), joined Professor Paul Longley's research project on surnames around the world at the Department of Geography, UCL.

Professor Longley had mapped surnames from the UK's 1881 Census of Individual Voters and the 1998 Electoral Roll to analyze the movement of surnames over more than a hundred years.

In the UK, a country with an ethnically diverse population, he measured ethnic residential segregation by inferring ethnic origins from surnames.

For the project of Professor Longley to create a world map of surnames, Professor Yano provided the Japanese surnames.

Features of the Surname Map

The interactive map provides users with valuable insights into the geographic distribution of their individual surnames in a simple and illustrative manner.

Firstly, the map displays the frequency of a surname in absolute numbers (人数) and ranking according to prefectures.

Secondly, the map shows the relative degree of accumulation, i.e., how evenly a surname is distributed throughout the country, with the specialization coefficient (特化係数).

An option is available to display the absolute numbers and specialization coefficient on two maps side by side.

Furthermore, the distribution trends of two surnames can be compared side by side.

The map enables users to explore and identify the geographic concentration and regional clusters of surnames.

For instance, the map reveals that some surnames are particularly unique to a region, such as 'Ganaha' (我那覇) in Okinawa.

In the case of Okinawa, the heavy concentration of 'Ganaha' (我那覇) has been considered a result of the relative isolation of the Ryukyu Islands that has led to minimal surname exchange with mainland Japan, whereas there are different reasons for other localities, such as government policy implications on the settlement of Hokkaido.

Professor Yano's Surname Map builds on the growing interest in the regional analysis of surnames in Japan and other parts of the world.

As in the UK, there exists no exhaustive historical surname data for the whole country in Japan. For Kyoto, however, a database has been created as part of the Virtual Kyoto Project--another project led by Professor Yano. He is working on establishing links within this data that comprise name data from land registry maps from the end of the Meiji period (1868-1912), telephone directories, and the names of people in commerce and industry during the Taisho period (1912-1926).

Other projects include an investigation in the hometowns of the Tonden soldiers (屯田兵) and migration flows of their descendants, identifying the hometowns of Nikkei (日系人) who emigrated from Japan, as well as a study of population movements in local areas of Japan over the past fifteen years, linking them to the census data at town and village levels.

Finally, Professor Yano is pursuing the possibility of digital humanities research on surnames, including the relationship between surnames and the name of places.

The Surname Map has been created by Ritsumeikan University in cooperation with Acton Winds Co., Ltd.

Project Overview:
At the center of this project, which involved Bachelor and Master students of Japanology at Goethe University Frankfurt, was the On Edo ezu (御江戸絵図) from the ARC database.
Drawing on maps, guidebooks, and colored woodblock prints, this project attempted to correlate various sources of both geographical and visual experience and knowledge to hypothetically reconstruct how they might have shaped the late Edo period consumer's consciousness based on the materials accessible to them.

Professor Kinski, thank you very much for your time. As the leader of the FY2020 ARC-iJAC project 'Edo Period Map goes Digital - The On Edo ezu as an Interactive Resource', could you tell us about your motivation to start this project?

Prof. Kinski: I began to develop a strong interest in Digital Humanities (DH) in 2012 when I saw a presentation by Bettina Gramlich-Oka--a colleague at Sophia University--about creating an interactive biographic database as part of her interest in social network analysis.

Striving to incorporate text mining, topic modeling, or semantic network analysis in my approach to Edo period intellectual history, I have been making efforts to raise the interest amongst students in the approaches towards Japanese sources derived from DH.

Frankfurt University owns a small collection of printed books covering the period between 1650 and 1850, our 'Edo bunko' which we use for exercises in the classroom to decipher and transcribe larger quantities of text.

A talented student of mine, Koray Birenheide, created a program called 'DemiScript' that allows us to work with source material--whether premodern, modern, textual or visual--and to present the results of our transcription efforts. A far more advanced tool than expected, I was convinced it could serve as a platform for a larger, more ambitious classroom project. 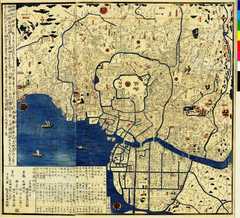 The ARC-iJAC provided a timely opportunity to put our plan into action by drawing on the materials in the ARC databases and combining the first-hand exploration of primary sources with concerns from urban infrastructure history and art history.

So, the purpose of your project was largely educational?

Prof. Kinski: Yes, our project was not devised as a research project as such. Its paramount aim was to bring students into contact with primary source materials.

Most project participants neither had training in 'classical' Japanese, such as kobun classes (古文), nor Edo period Japanese or had encountered Edo period script and what often is called 'hentaigana'.

Furthermore, I wanted to provide students with an outline of Edo period urbanity, urban infrastructure, the representation of geography in the context of a 2D map, and the solutions chosen by the editors for this purpose.

A secondary effect of this project was the in-depth study of the On Edo ezu in a language other than Japanese and the correlation between the map and Hiroshige's ukiyo-e prints--two media available in the Tenpō period to find spatial and temporal orientation.

The students identified and linked Hiroshige's choice in scenic spots and famous places to their counterpart sites on the map. This way, we could verify the exactitude of both the map and the prints and get an idea of what kind of materials were available for Edo period inhabitants and travelers to find their way around.

How do you feel about the execution of the project, and what kind of feedback did you get from your students?

Prof. Kinski: At first, I naively thought that integrating questions and methods derived from DH would meet with a positive echo amongst students. However, despite the ubiquitous talk about living in the digital age, most of them did not immediately share my enthusiasm for DH in studying Edo Japan.

The On Edo ezu project served to overcome these reservations towards using computer-based approaches to explore Edo Japan and strengthen their intrinsic motivation to learn about Japan's past rather than contemporary Japan.

And indeed, this project turned out to provide fun, insight, and the feeling of exploration and discovery for most of my students. Organized in small groups working on a well-defined target independently, they have expressed in their end-term evaluation that this was a new and satisfying experience learning about premodern Japan.

I hope that the project has also encouraged them to find an individual creative niche for themselves and their study interests in the future.

How did you connect with the ARC-ijAC?

Prof. Kinski: My original interests lie in the Edo period intellectual and cultural history. Although my connection to Ritsumeikan University goes back to 1990, I only became fully aware of the ARC when I got invited by Andrew Gerstle (SOAS) to join his ARC-iJAC project Cultural Salons and Visual Arts in Kyoto and Osaka, 1750--1900.

This project encompassed the idea of exploring 'networks', and I was investigating Kaiho Seiryô (1755-1817) and his social network as part of this.

The project was the starting shot for what I consider a major discovery for me. Besides providing me the opportunity to explore Seiryô as a bunjin (文人) who was active in salons in Kyoto around 1810 and made the acquaintance of other bunjin painters, it also gave me a chance to see some of the works of Seiryô in private collections.

I am grateful to Ryo Akama, Andrew Gerstle as well as the ARC resources that have allowed me to pursue my interest in Seiryô as a bunjin and to set his works and endeavors in perspective.

Prof. Kinski: I hope that such research endeavors as pursued by the ARC and ARC-iJAC can continue in the future without the worry of financial resources. Bringing people together in international, interdisciplinary projects like this is of utmost importance.