ARC Crowdfunding Project Restoration of the Third Volume of the Shuten-doji Picture Scrolls (酒呑童子絵巻): The Restoration is completed

The Art Research Center (ARC) is delighted to announce that the restoration of the third volume of the Shuten-doji picture scrolls is completed.

Previously in private possession in the US and Europe, where it escaped the fires of World War II, a set of five volumes of damaged picture scrolls depicting the folktale of Shuten-doji returned to Kyoto for the first time in 130 years.

The tale of Shuten-doji, a mythical demon leader, thought to be residing in Mount Oe northwest of Kyoto, has often been featured in noh and kabuki plays. 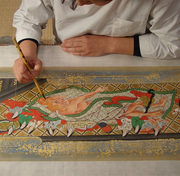 Entrusted with its restoration, the ARC started a crowdfunding project two years ago for the third volume of the picture scrolls which depicts the most dramatic scenes of the folktale but was particularly damaged and considered difficult to restore. We have since been able to beautifully revive this picture scroll thanks to our many supporters.

Oka Bokkodo Co., Ltd., a Kyoto-based company with over a century of experience preserving cultural heritage, was in charge of its restoration. 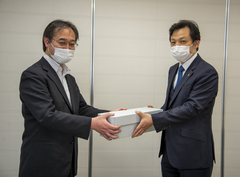 In the next step, the ARC will digital-archive the third volume and make it publicly available in the center's database.

We express our deepest gratitude to Oka Bokkodo Co., Ltd. and all the supporters of the Shuten-doji crowdfunding project.