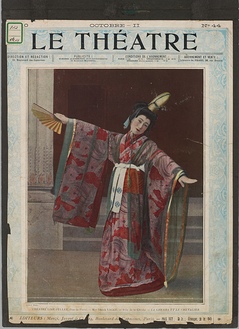 The Shochiku Otani Library that has been implementing the FY 2020 Adopted Joint Research Project (Open Theme) "A Study on the Construction of a Theater Material Image Search System that Utilizes the Theater Performance Record Database (演劇上演記録データベースを活用した、演劇資料画像検索閲覧システムの構築に関る研究)" as part of the International Joint Digital Archiving Center for Japanese Art and Culture (ARC-iJAC) has released the Otojiro & Sadayakko Kawakami's Album of European and American Performance Materials (Otosada Album).

The Shochiku Otani Library Special Data Browsing System has been developed by the ARC-iJAC.

Otojiro Kawakami was a pioneer of the Liberal Civil Rights Movement, actor, and entertainer who enjoyed great popularity with his Oppekepe song. Regarded as a founder of the shinpa theatrical form that originated in the Meiji Period, he played a major role in the modernization of Japanese theater. Furthermore, Sadayakko, who became his wife, is considered as Japan's first actress in the modern period.

This album is extremely valuable because it contains letters and magazine articles from the time when Otojiro and his troupe toured the United States and Europe starting from April 1902.

For more details on the Otosada Album, please see the article below:

The Shochiku Otani Library, founded in Tokyo in 1956, is dedicated to materials concerning Japanese theatrical works (mainly kabuki, bunraku, shinpa, shingeki, and commercial plays) as well as movie and TV-related scripts, magazines, posters, and photo collections, amongst others.