A nuihaku is a small-sleeved (kosode 小袖) noh costume made of soft silk and worn for roles of women, young men, and kyōgen women. Unlike karaori or atsuita, patterns on a nuihaku are embroidered and stenciled.

When it is worn as an undergarment by women, young boys（e.g. Yoroboshi『弱法師』), and warrior-courtiers (e.g. Atsumori『敦盛』 and Tadanori『忠度』), the softly yielding nuihaku robe is crossed over the chest and bound at the waist so it hugs the hips in kinagashi draping. The nuihaku may also be folded down at the waist so the sleeves hang over the hips in koshimaki draping, exposing the surihaku undergarment as a contrasting "upper" to the outfit. In noh plays like Dōjōji『道成寺』, and Aoinoue『葵上』the shite wears a karaori 唐織 over the koshimaki outfit in the first act when she appears as human, but sheds the outer robe in the second act when she appears as a jealous snake-like figure. In Hagoromo『羽衣』, however, the Celestial Maiden, having laid aside her outer robe to bathe, first appears in a koshimaki outfit and later dons a chōken 長絹 over the nuihaku koshimaki outfit. For roles of women in kyōgen, the nuihaku is draped a little more loosely in kinagashi style and bound at the waist. 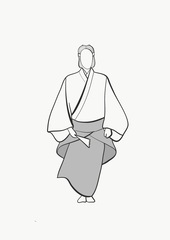 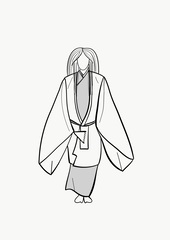 Similar to the surihaku 摺箔 robes, the silks used for nuihaku tended to be glossed plain weave in the sixteenth century, but since the seventeenth century they are generally satin, figured satin, or a glossy twill. As the name implies, two different techniques are used to decorate nuihaku: embroidery (nui) and stenciled gold or silver foil (haku). The latter is explained in the surihaku entry. The style of embroidery changed over time. Broadly speaking embroidery of the late sixteenth century is characterized by densely filling in areas of the robe with long parallel stitches on the surface held down by tiny stitches on the reverse (watashinui). During the Edo period embroidery became increasingly realistic and the types of stitches multiplied.

The garments are generally dyed after weaving either in a solid color, like white, red, blue, yellow, light brown, purple, and black, or in bands or blocks of color. Overall designs range from densely filling the whole robe with embroidery on solid gold to scattering small motifs over a light background of geometric stencil repeats. Limiting embroidery to the shoulder and hem (katasuso) typified sixteenth-century nuihaku but proved practical later particularly when the nuihaku was worn folded down in koshimaki draping. As primarily women's wear, typical motifs are taken from nature: flowers, blossoming trees, birds and butterflies. Evoking season and often also literary tropes, the designs are imaginative, poetic, and colorful. 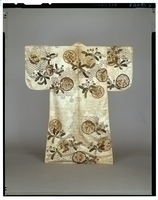