A karaori is a small-sleeved (kosode 小袖) noh costume brocaded with floral and other designs using floated wefts of various colors and is worn primarily for women's roles. Draped differently, it can be worn as the main garment, as an outer robe tucked up over another garment, and as an under garment.

Karaori are a standard garb for shite roles of women appearing in the first part of a noh and for many tsure roles. The shite of Izutsu『井筒』, Kamo 『賀茂』, Nonomiya 『野宮』, and Funa Benkei 『船弁慶』 wear the karaori as an outer garment and draped "straight" with an open V over the chest (kinagashi). Crazed women, like Sakagami in Semimaru 『蝉丸』 and women at work, like the tsure in Eguchi 『江口』, have one sleeve slipped off (nugisage 脱下). Karaori draped over divided skirts and tucked up at the waist (tsubo-ori 壷折) are worn by high ranking women, like the imperial consort in Yōkihi 楊貴妃, and by sprites like Shōjō 『猩々』. For the role of the dancer in Dōjōji 『道成寺』, the karaori is tucked up at the waist and draped over another kosode garment. In addition, a karaori can be worn as an undergarment by warrior courtiers, such as Atsumori 『敦盛』 and Tsunemasa 『経正』. 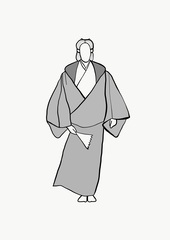 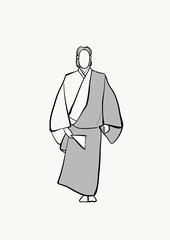 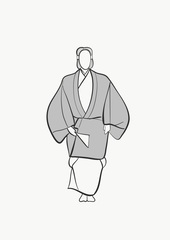 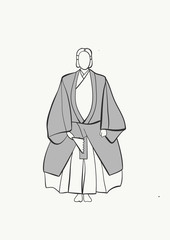 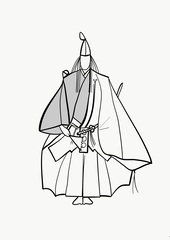 The karaori textile consists of a ground twill (usually 3 harness) and supplementary weft patterning. The ground may be a single color or form a large checkerboard pattern known as dangawari, created by tie-dyeing the warp (ikat, kasuri) into bands of color. The patterning silk floss rises above the densely packed ground to create the effect of three-dimensional embroidery. Each repeat of the pattern unit distributes the colored threads differently, creating an effect of infinite variety. The incorporation of gold thread adds an extra layer. The box sleeves of the karaori are stitched up at the outer edge till the wrist and are sewn to the body panels. Extra front lapels and a wide collar provide enough breadth to cross the front garment over the chest and secure it with sashes at the waist.

Seasonal floral designs predominate. Other motifs include imagery from the classics, like the Tale of Genji, or waka poems. These often appear as float patterns over a background repeat motif, such as waves, diamonds, running water, or lattices. Young women wear karaori that include red and are referred to as "with color" (iro-iri) , while older women's karaori have little or no red and are designated as "without color" (ironashi). 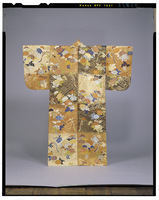