A mizugoromo is a broad-sleeved (ōsode 大袖) noh costume with single-width open sleeves and flared lapels, that is worn as an outer 'traveling' or 'work' cloak by characters of men and women of all ages and professions, particularly commoners and Buddhist priests. This three-quarter-length, unlined jacket is most commonly made of a plain weave fabric in a single color.

The mizugoromo is used mostly for roles of commoners. Traveling women (Sumidagawa 隅田川), working women (Matsukaze 松風), nuns (Ōhara Gokō 大原御幸) and old women (Sotoba Komachi 卒都婆小町) wear the mizugoromo loosely draped from the shoulders. Men wear their mizugoromo belted, tucking up the sleeves for work. Traveling monks (tabisō) appearing as waki in many dream noh (mugen noh 夢幻能), wear plain brown or blue mizugoromo over a kosode. If they are higher ranked monks, or mountain priests (yamabushi) such as Benkei in Funa Benkei 船弁慶, the mizugoromo is worn over ōkuchi 大口 pleated trousers. Commoner old men appearing in the first part of a noh (Tadanori 忠度) belt the jacket over a checked kosode, either an atsuita 厚板 or a noshime 熨斗目, while dignified old men in first-category Deity plays (Takasago 高砂) hike up the sleeves to work, but drape the garment over ōkuchi. Suffering ghosts in hell, such as Shi-no-Shōshō in Kayoi Komachi 通小町 wear their mizugoromo belted over ōkuchi. 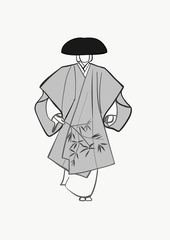 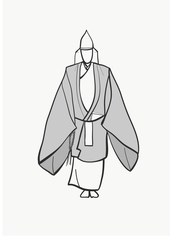 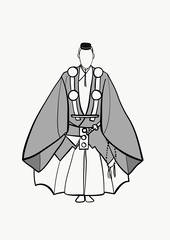 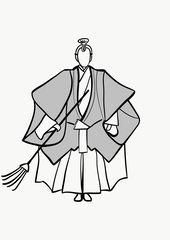 The mizugoromo, which was created for stage use, probably sometime in the sixteenth century, is the only open-cuffed ōsode noh costume tailored with only one width of fabric for the sleeves. The sleeves are stitched to the body of the garment from the shoulders down to chest level and then allowed to hang free, facilitating movement. The front and back body panels are stitched together along the side seam so that when the garment is belted, it fits snugly over the hips. Long triangular inserts serve as front lapels. The broad collar edges the lapels almost all the way to the hem.

Mizugoromo can be made with four types of fabric. Most common are single-colored plain weave silk (shike). Striped (shima) mizugoromo are standard for Yamabushi priests, though when there are many Yamabushi on stage at the same time, as in Ataka 安宅, the supporting roles often do not wear stripes. The sheer, half-transparent effect of gauze-weave (sha) provides a texture alternative. Finally, the loosely-woven yore with spaced wefts that are later displaced giving a frayed, ragged transparency create a sense of poverty and suffering, as in plays featuring the hundred-year-old poetess Ono-no-Komachi, as well as roles of suffering ghosts, such as the bird hunter in Utō 善知鳥.

Single-color plain weave silk (shike) mizugoromo tend to be brown or dark blue for male roles, but white, pale blue and lighter colors are common for women. The broad stripes of the shima mizugoromo generally have dark blues, greens, or browns. The gossamer sha mizugoromo can be either dark or light and sometimes include a stenciled pattern. The ragged yore mizugoromo tend to be white, cream, light blue, or dark earth colors. 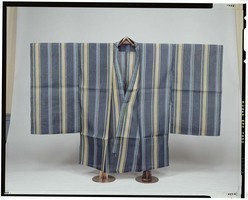