A maiginu (literally "dancing cloak") is a broad-sleeved (ōsode 大袖) noh costume of gossamer fabric worn by characters of women who perform long instrumental dances. Generally, a maiginu is made of a gauze weave with gold or other patterning. It differs from the chōken 長絹 in having front lapels that are crossed and belted so that while the sleeves sway freely with the dance, the body of the garment adheres to the performer's torso.

This dancing cloak is worn for roles of women in the fourth category noh. The daughter of the dragon king Ama 海人 appears in a maiginu bound at the waist and draped over ōkuchi 大口, while the wife of the drum player Fuji wears a maiginu over a nuihaku to dance gaku (Umegae 梅枝, Fujidaiko 富士太鼓). 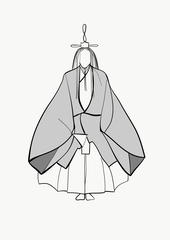 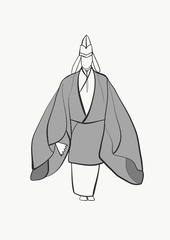 Like chōken, maiginu are fashioned out of gossamer fabrics that catch in the breeze, such as ribbed gauze (ro) or simple gauze weave (sha) that might be self-patterned. Supplementary patterning is done in gold, silver or colored threads. In rare instances, designs may be painted, stenciled, or embroidered. The long main panels are sewn together front to back from waist level down and the front panels have extra lapels so they overlap over the chest when the garment is belted. The open cuff, double-width sleeves lack the tassels at the outer corner found on chōken. Maiginu also do not have tying cords at the chest.

Scrolling vines and floral motifs scattered over the entire garment are common, as are geometric patterns like undulating lines, diagonal grids, and roundels. Ground colors include purple, red, gray, white, and occasionally blocks of more than one color. 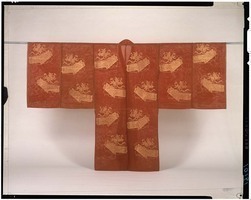